This was a prospective, randomised placebo-controlled study aiming to evaluate the effect of xylitol and probiotics on salivary bacilli. 80 healthy young adults aged 21-24 years were included and divided into 4 groups (4×20). 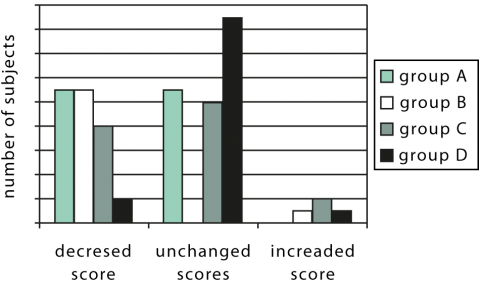 Fig. 1 Transition of salivary mutans streptococci scores when posttreatment levels were compared with the baseline in the different experimental groups. Decreased scores=1–3 steps under baseline; unchanged score = same as baseline; increased score = 1 step over baseline. The distribution in group D (control) was significantly different (p<0.05) from the distributions in groups A–C

Conclusion: The results suggest that a three-week consumption of either 3 Lactobacillus reuteri Prodentis chewing gums or 6 xylitol chewing gums can reduce the load of mutans streptococci.