Lactobacillus reuteri Gastrus in the management of Helicobacter pylori infection

The eradication rate of Helicobacter pylori following the standard triple therapy is declining. This study was conducted to test whether the addition of a new whether the probiotic Lactobacillus reuteri Gastrus (L. reuteri DSM 17938 and L. reuteri ATCC PTA 6475), as an adjunct to standard triple therapy, improves the eradication rates as well as the clinical and pathological aspects in Helicobacter pylori infection.

A total of 70 treatment naive patients were randomly assigned into group A (the Lactobacillus reuteri treated group) and group B (the placebo control group). Patients were treated by the standard triple therapy for 2 weeks and either Lactobacillus reuteri or placebo for 4 weeks. They were examined by symptom questionnaire, Helicobacter pylori antigen in stool, upper endoscopy with biopsies for rapid urease test and histopathological examination before treatment and 4 weeks after completion of the supplementation period.

The eradication rate of Helicobacter pylori infection was 74.3% and 65.7% for Lactobacillus reuteri and placebo treated groups, respectively:

At 8 weeks there was a significant difference within groups in the scores of the Gastrointestinal Symptom Rating Scale (GSRS). Subjects in the L. reuteri group had greater improvement, though, than those in the placebo group (p<0.01): 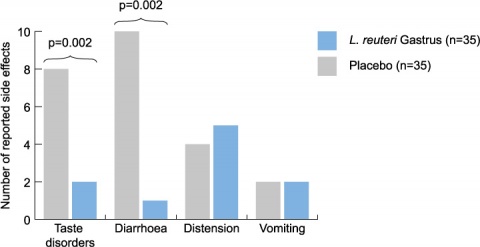 A significant difference within each group was observed after treatment regarding Gastrointestinal Symptom Rating Scale (GSRS) scores; patients treated with Lactobacillus reuteri showed more improvement of gastrointestinal symptoms than the placebo treated group. The severity and activity of Helicobacter pylori associated gastritis were reduced after 4 weeks of therapy in both groups. The Lactobacillus reuteri treated group showed significant improvement compared with the placebo treated group:

The Helicobacter pylori-associated gastritis was significantly improved at the follow-up at 8 weeks, with reduction in the scores of inflammation and activity within both groups. The improvements were, however, stronger in the L. reuteri group compared to placebo: p<0.001 and p<0.05, for the inflammation and the activity score, respectively.