Being pregnant is a fantastic experience but it is also a major adjustment for your entire body. You are no longer alone in your decisions and actions, but sharing everything with a tiny baby. In many ways, your days as a mother have already begun. Good bacteria may help to improve the gastrointestinal balance, protect against infections and has in numerous clinical trials proved to be safe for both mother and baby.

Feeling bloated and constipated? You are far from alone. Up to 50% of all pregnant women suffer from constipation at some point during the pregnancy. Constipation can put a damper on most pregnancies but can also lead to, or worsen, hemorrhoids. Try to improve your bowel movements by eating more fibers, drinking a lot of water and exercising. Also, studies have shown that Limosilactobacillus reuteri (formerly known as Lactobacillus reuteri) affects gut motility. 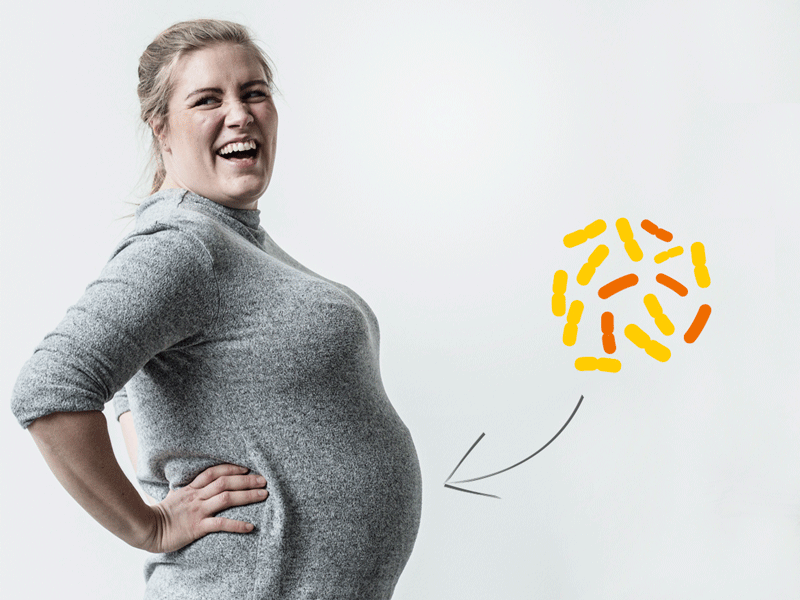 Protect yourself from infections

Staying healthy with a strong immune system is always important, but even more so during pregnancy. Although pregnant women aren’t more susceptible to initial infection in general, the physiological changes of pregnancy, for example decreased lung capacity, urinary stasis, changes in blood flow, and hormonal shift, may make a disease more severe than it normally would be. Our modern lifestyle, with too little exercise, unhealthy food and high levels of stress can further increase the risk of getting sick. Since 80% of the immune system is located in the gut, taking good care of your gut is an important first step.

The importance of gut bacteria

Since a severe infection may risk the health of both mother and child, affected women are often treated with antibiotics. Although antibiotics may be great for beating out ongoing infections they are unfortunately equally efficient in killing healthy and helpful bacteria, and can cause adverse effects such as nausea, vomiting and skin rash.

During pregnancy the volume of blood in your body increases and your hormonal balance changes. This also means that you have lower resistance to bacteria and more easily develop infections in your mouth. Inflammation of the gums, known as gingivitis, is a condition that affects many pregnant women. The most common symptoms are red, swollen and bleeding gums, making both teeth and gums overly sensitive.

In addition to daily oral care and regular visits to the dentist, supplements of natural lactic acid bacteria can be an effective complement to improve your oral health and prevent inflammation. In studies on pregnant women, lozenges and drops containing lactic acid bacteria have been shown to promote a balanced oral microbiota.

Read more about oral health and inflammation of the gums

Promote the microbiota after C-section

One of the benefits of giving birth vaginally is the microbial transfer. During vaginal delivery the baby is colonized by maternal vaginal and fecal bacteria, while babies born via cesarean section instead are colonized by bacteria associated with the skin and the hospital environment and the establishment of healthy bacteria is thereby delayed. Birth by C-section has been associated with the development of allergy and asthma, as well as type I diabetes, celiac disease and obesity, which may be linked to the altered microbiota colonization in those babies. However, new evidence suggests that probiotic bacteria could prevent early microbiota dysbiosis induced by C-section delivery, making their microbiota more similar to that of vaginally born babies.

The most common diagnostic criteria for colic is if the child is under the age of five months and has recurrent and prolonged periods of crying, fussing, or irritability that occur without...

BioGaia’s probiotic products with L. reuteri are among the most scientifically well-documented probiotics in the world with regard to both efficacy and safety.

Diarrhea is a very common problem in children younger than age five. The definition of diarrhea is three or more loose or liquid stools per day.